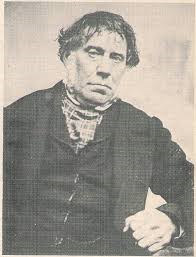 George Smith was the second of the regions famous “higglers” (a local expression for a hangman), after William Calcraft (1800–1879), from Dudley. George, popularly known as ‘Throttler Smith’, or ‘The Dudley Higgler’, the son of Thomas and Frances Smith, born in a tiny cottage in Rowley Regis near Dudley, later resided at Oakham, Staffordshire. Although from a good family he became involved in petty crime early in life, and was imprisoned in Stafford gaol on several occasions for theft.

There is a record of him marrying in Dudley in 1827, though much of his family history remains vague. He may have fathered a son, also called George. Between his various labouring jobs, George was a heavy drinker, and was no stranger to the courts and prison staff. His first brush with the Law was in 1825, when he got 12 months for poaching. This was followed in 1829 with 1 month for petty larceny, a spell of 3 months in 1839 for the same offence, and numerous appearances and fines for being drunk.

Smith had a stroke of luck in 1840 during his latest period of incarceration for failing to support his family and petty larceny again, when William Calcraft arrived for a double hanging. Calcraft’s assistant failed to show up, (drunk in The Leg of Lamb), so he asked the prison Governor, then Thomas Brutton, for assistance. George Smith, was the only volunteer, and so began his career as a hangman, preferring the “short-drop” method where the victim could take some time to die, much to the delight of the crowd.

Smith’s highest profile hanging was Doctor William Palmer, (the infamous Rugeley poisoner), executed on 14 June 1856 after having been found guilty of poisoning John Parsons Cook, but who supposedly had murdered 14 people including his mother in law to fund his gambling debts. Smith’s fee was 5 Guineas to carry out the grizzly task, although as much as £15 plus expenses was possible.

On Tuesday 10th Jan 1866 – George Smith, sporting his usual attire of top hat and smock, stepped up to the gallows outside Stafford gaol in front of a rather cold, but excited crowd of nearly 4000 spectators. Christopher ROBINSON, after convulsing and jerking for seven minutes, was sent to meet his maker.

George’s final public execution took place on 5th July 1866, outside Stafford gaol. The victim this time was Collier, a poacher who had been found guilty of the murder of a local worthy (VIP). Unfortunately for Collier the rope slipped from the overhead beam of the gallows on Smith’s first attempt, resulting in a five minute delay before a replacement could be rigged.